So many hills today! Even the downhills and flats felt like uphills. There were less coastal roads and more mountains today, cycling either up or down the mountain sides.

There were still a few bike paths off the main road, some leading onto bridges. 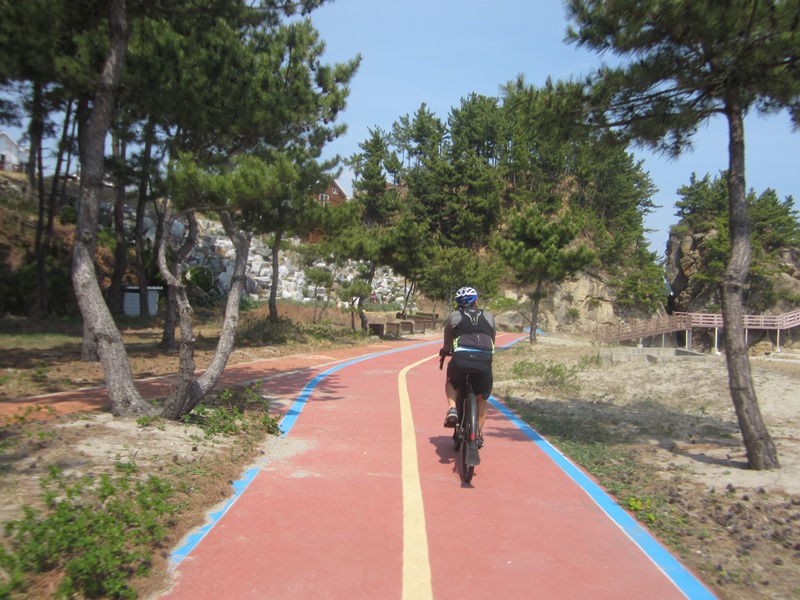 Some of the bridges got really narrow which made me a bit nervous to cycle on, especially when they got quite steep. 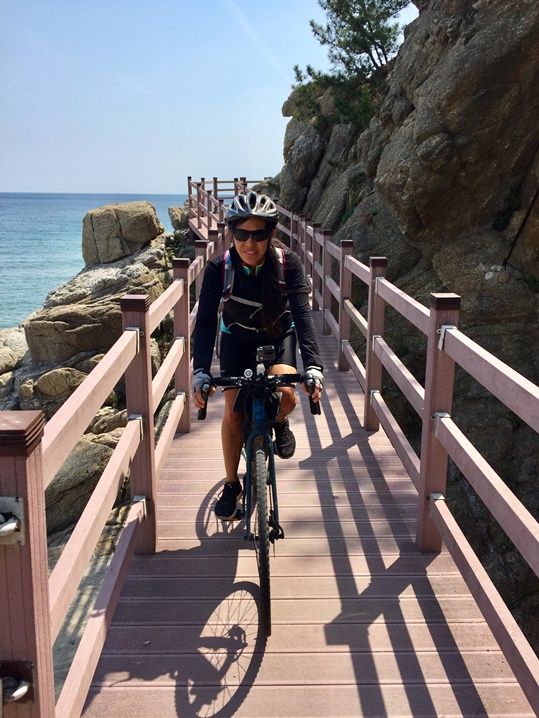 After 35km we reach our first stamp stop in Imwon.

For lunch we come across a road side Korean buffet for just 8,000w. It was mostly vegetarian and had all our favourite Korean dishes – kimchi, noodles with broth, kimbap, japchae, inari, pajeon, banchan and rice. Cheye makes a comment ‘if only they could follow us during our cycling trip so we could have an endless Korean buffet on the road’.

According to the map we still have two hills left for the day. The scenery changes a lot throughout the day.

We notice a big industrial area along the coast…

…and the start of many barbed wire beaches.

We see lots of signs for a ‘Cycle Train’ which I’m curious about. Upon reaching one of the small towns, we discover it’s a bit of a tourist attraction.

At the top of the last hill we reach our final stamp point for the day just before Samcheok. 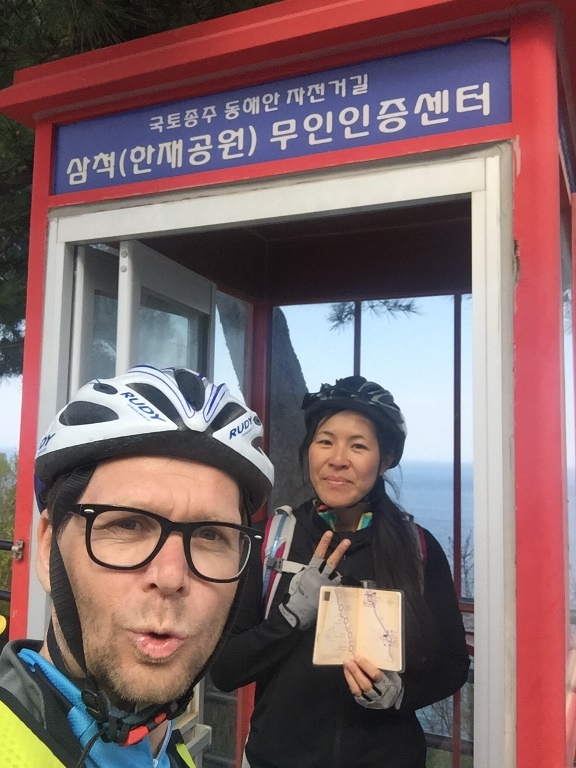 I’m so glad when we finally finish climbing them as those hills have been tough as nails today! The views are pretty spectacular though.

In our final kms towards Samcheok we pass a group of pro looking cyclists. A bit futher on we pass a few more and it’s not long before we see one with a race number pinned to his jersey and realise there is a cycling race event going on. Cheye mentions there are a lot of fancy bikes around and starts listing expensive bike brands he notices. 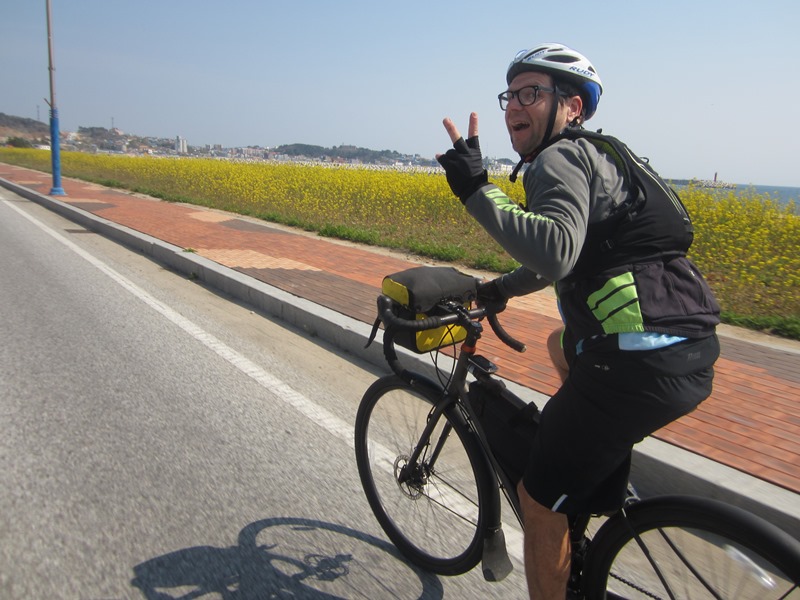 We eventually make it to Samcheok and look around for a motel. The first one I drop into has no one at the counter so we go a few more blocks and see two on the side street. We’re about to check the price for each one when a man pops out of the first one and shows us a place we can park our bikes for the evening. So we pick that one.

It’s one of those traditional Korean style rooms with a fold out bed on the floor which we haven’t stay at yet during this trip. It comes complete with Korean pin-up girl on the wall.

After settling in we head out in search of some dinner. I spot a pizza place on the map which grabs Cheye’s interest but I feel like some traditional Korean food. We end up settling for bibimbap and dokpokki at the local Homeplus, then stock up on some supplies for tomorrow. The night isn’t as cold so we take our time wandering back to the motel. 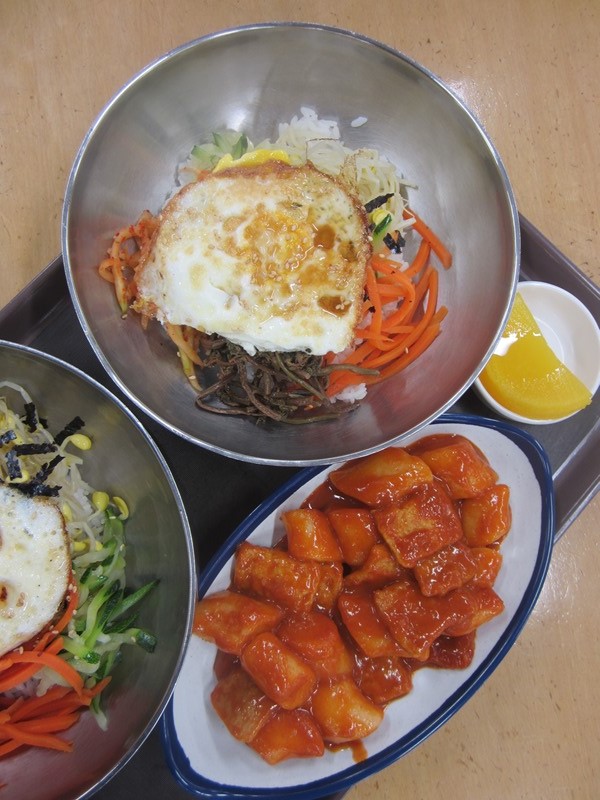 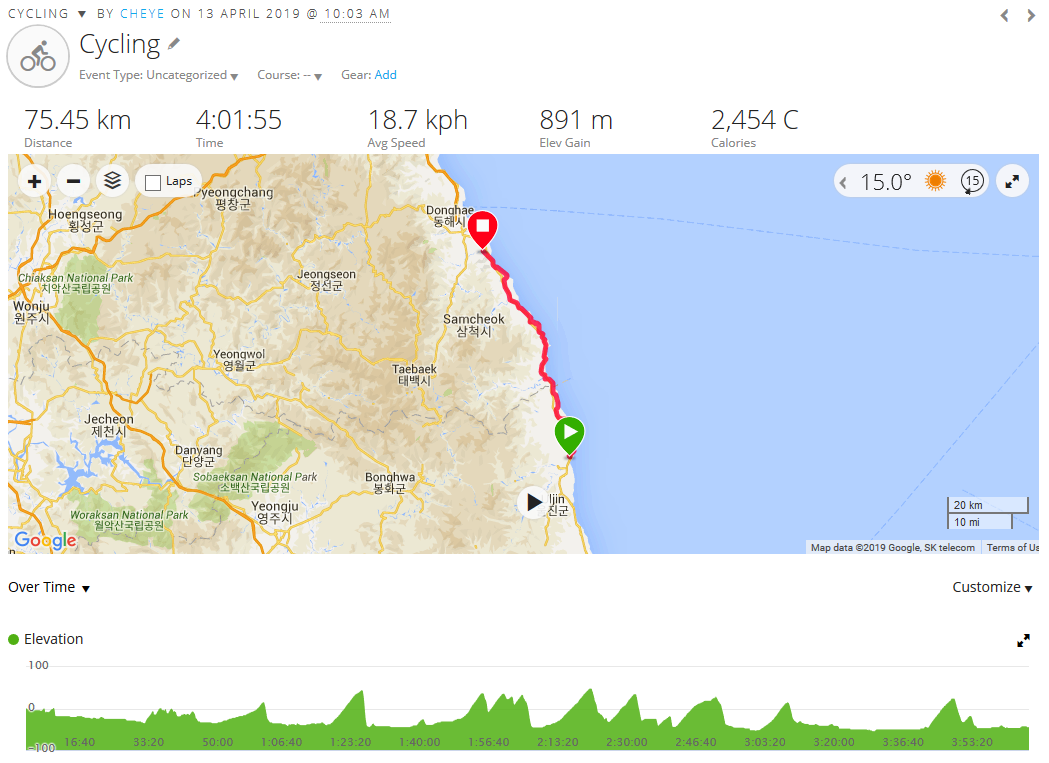 SOUTH KOREAN TRAVEL TIP
All motels we stayed at included the basic essentials such as towels, toothbrush and toothpaste, so if you want to travel really light you don’t even need to bring these along. Some places even have beauty products such as face wash, body lotion, hair and grooming products.