Cheye and Rory don’t make it home until about 4am and the only reason I know this is because I awaken to the sound of them trying to open the door using the keypad lock code. They sound like they’re struggling with the door so I got up to help them open up. Turns out they had forgotten which apartment we were staying in and had tried about half a dozen other doors beforehand without success. I’m picturing our neighbours, terrified that someone is trying to break into their apartment. Surprisingly though, the boys had actually remember the keypad code correctly!

After a few more short hours of sleep we get up and leave around 9:30am to make our way to Dongducheon Jungang for the annual Korea 50k Trail Run. We’ve decided to sign up for the 10km race and even our Korean mates Jimmy and Martin are joining us. I believe we’ve told Rory that we’re going for a ‘nice trail walk’ so I’m not sure if he knows what we’re in for with all the climbs.

A few train transfers later we arrive and make our way to Dongducheon stadium, our starting point. Along the way we start chatting to a Japanese couple as we notice the girl has a Zumba bag (Rory is a Zumba instructor). Turns out she is also an instructor and doing the 10km race as well.

We pick up our race kits which includes a shirt, race number, some stickers and sponsor flyers. We all decide to wear our new shirts for the race.

The entertainment kicks off as we are getting ready. First up they do the presentation for the 50km race which had started at 6am this morning. The winner completed the course in 5hr 23min.

Shortly afterwards some ladies take us through a warm up to prepare us for the race. They start off with some Zumba moves. 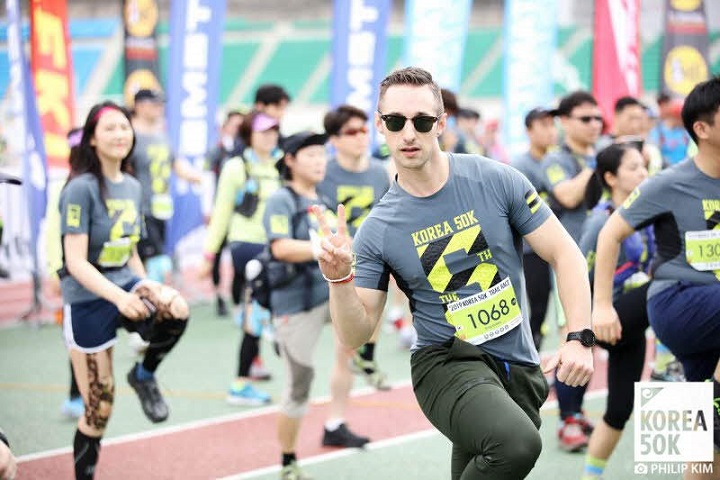 Followed on with some dynamic stretching.

As I’ve been following a training program for my running back home the boys tell me they want me to win the 10km race or at least get a podium spot. My legs are still in a world of hurt after our seven hour trek on Thursday so I’m not sure how I’m going to hold up and doubt I’ll finish without a struggle.

We make our way to the start line and stand there for a few minutes before someone realises we are facing the wrong direction and asked to move to the other side of the start line.

The starting gun goes off and we do a lap of the track before making our way towards the streets and trails. As we leave the stadium I see a steep uphill already… and that’s just the start of it. The next 9km are an experience! 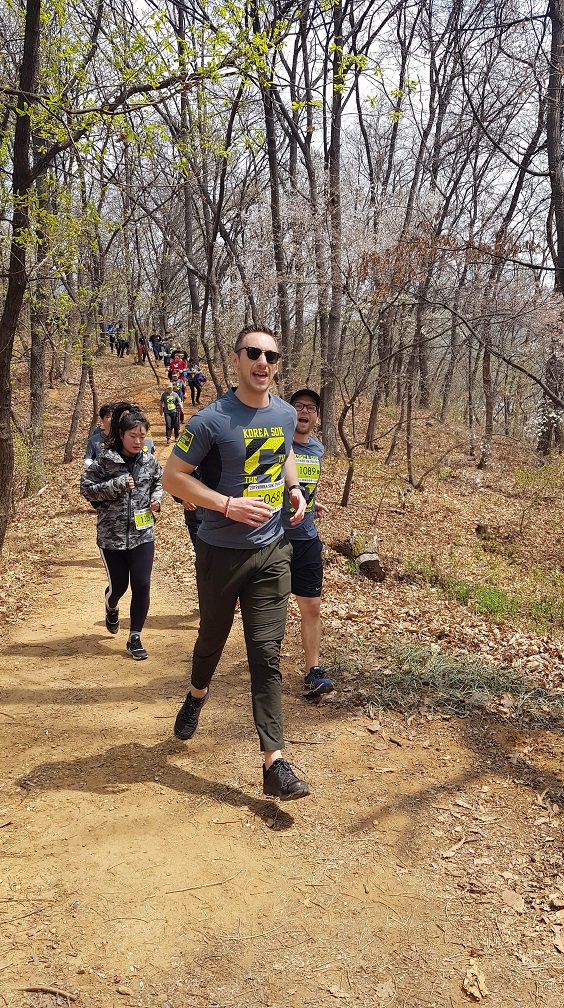 The dirt tracks, the constant up and down hills, having to run (and sometimes walk) up steep inclines and steps. I race off ahead as the boys decide to take their time.

I’m actually leading the female field for the first 2km until a girl overtakes me and races ahead for the next 6km. The final km is a steep downhill right back to the stadium and I make up a lot of ground until I’m right on her tail. We are neck and neck during our final lap around the track but my legs just can’t hold out and I scrape in a close 2nd place, but only by a few seconds. I reckon had I not been suffering from major DOMS I probably could’ve taken it, but I’m pretty stoked with 2nd place especially for my first international race!

I make my way over to congratulate the girl who came first and turns out it’s the Zumba girl we had met earlier that morning! We have a quick chat – her name is Ji Woo, she’s from Seoul and it’s her first time doing this run. She asks if I came to Korea just for the race but I tell her we had been cycling the past two weeks up the East Coast which she seems super impressed about. 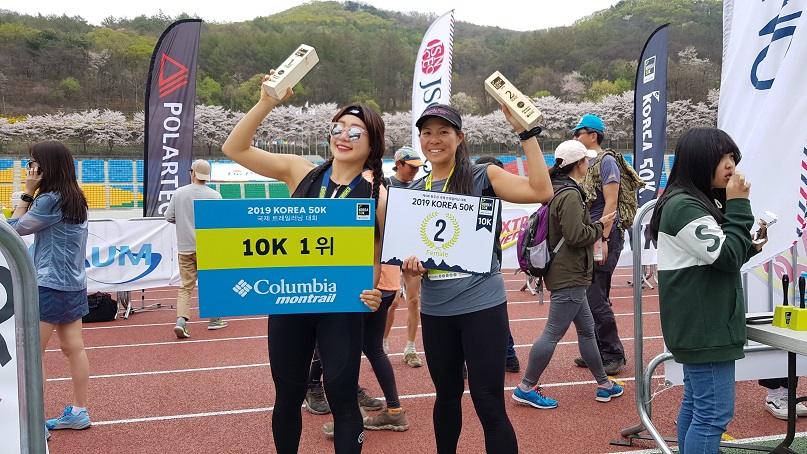 I keep my legs moving and wonder how long the boys are going to be. I see Martin first who ran most of the way and he tells me the rest of the gang are still walking. 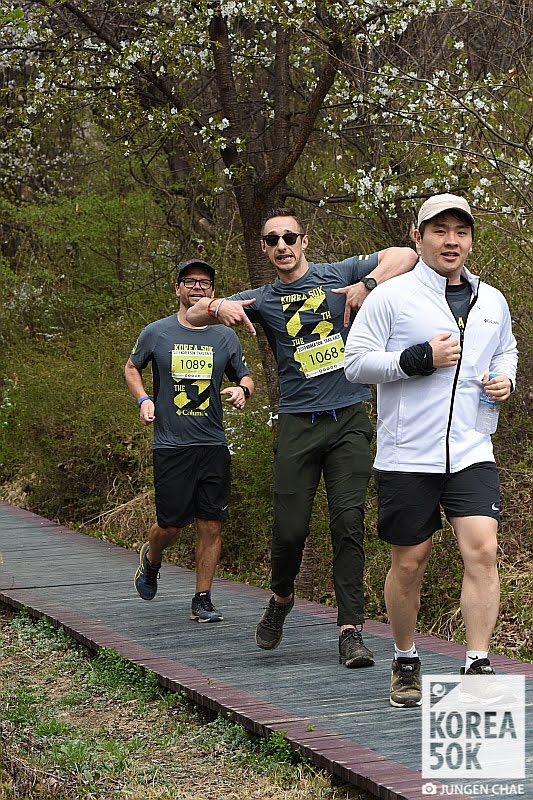 We decide to grab some food at the tent which has been set up – the event organisers offer all the runners a free Korean meal and beer after the race. Eventually we spot Cheye, Jimmy and Rory and they join us for a feed.

As we head back to the main stage they are about to start the presentations and begin with the 80km event. The winner completed it in 7hr 40min but majority of the runners are still on the course having started at the crack of dawn (4am!). They then continue with the 10km awards and call me up to the stage.

I have no idea what they are saying but they direct me to stand on the podium – my first time standing on one! They present me with a trophy and certificate, and it turns out later that I’ve also won a pair of shoes which wasn’t expected.

I get a few photos with the crew and we stretch a little while using the foam rollers before heading off. 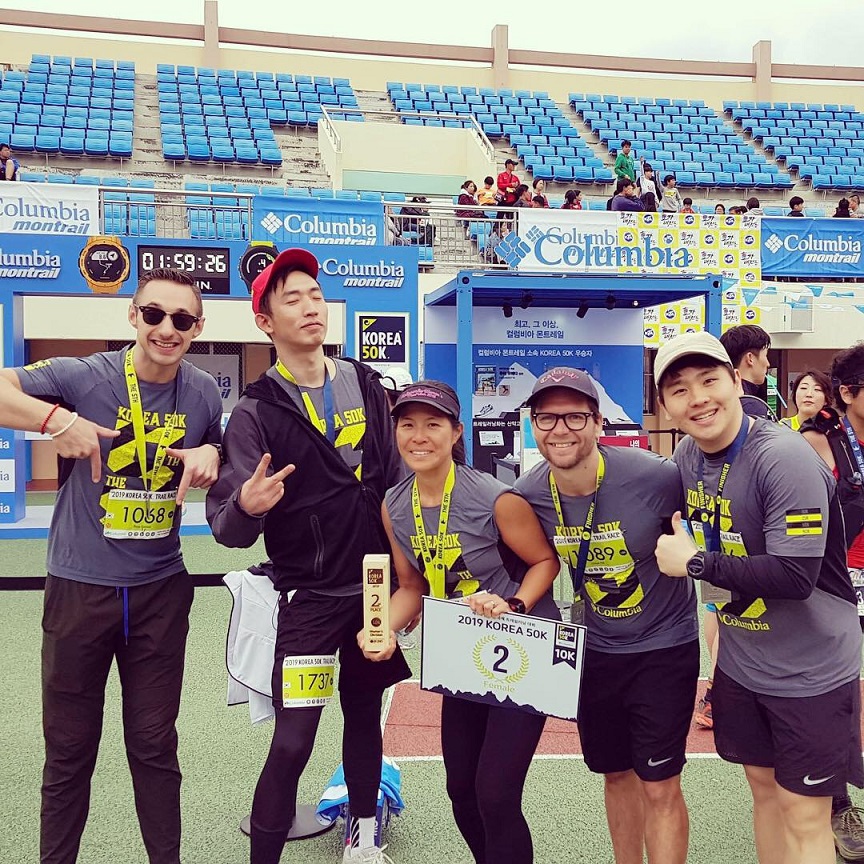 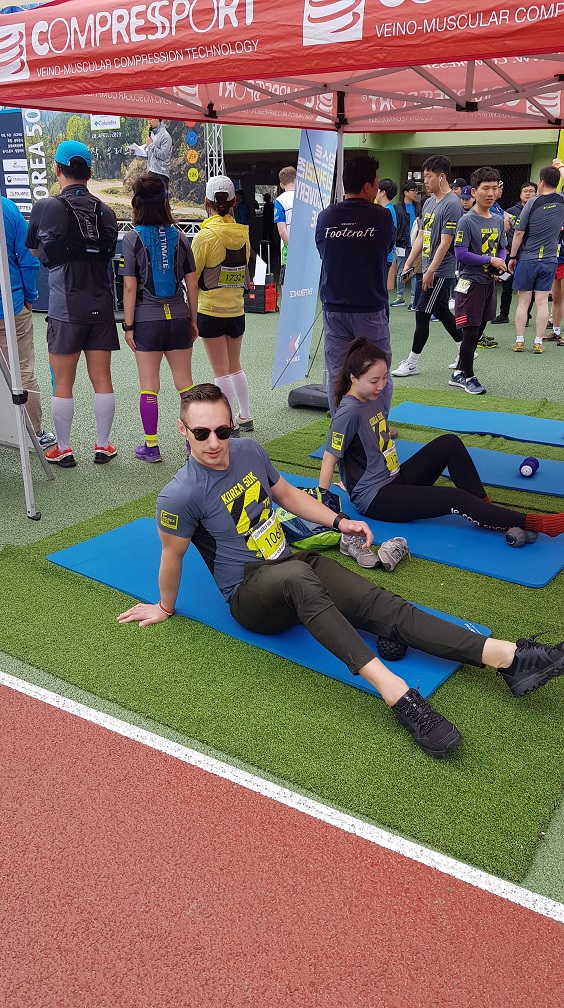 Jimmy drives us back to Seoul and the boys head out for a messy night on the town in Itaewon while I rest my legs. I try to make plans for our final few days left in Seoul but end up crashing out for the night!