After a horrible previous day on the bike, we wake to find it’s not raining or as cold as yesterday, and can even see a bit of sunlight peeking through the clouds. We pack our things up, have some bread for breakfast that we bought last night from the supermarket and head off at around 10am. 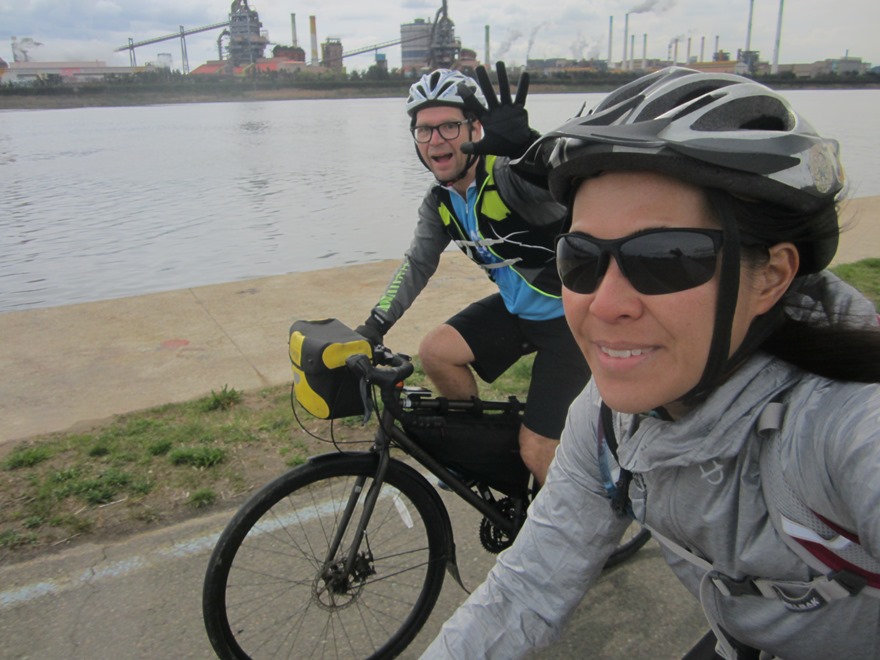 According to the map we just need to follow the bike path all the way to our destination today, Sunrise Park, so we make our way towards the river.

Today we finally start stamping our cycling passport books that we’ve been hanging onto since our last two trips to Korea. Last time we checked off the Cross Country route and this time we will stamp off the East Coast route.

Compared to yesterday’s horrendous ride, today is an absolute breeze. It’s so nice to not have to battle rain, cold temperatures and head winds.

We cruise our way down the bike path along the coast…

…and through small beach side towns.

We stop at a cute photo spot by the beach and ask a man passing by to take a photo for us. Looks like he had no idea how to use our camera though…

At one point we pass through Yeongdeok – a ‘crab village’ where virtually every store sells the same thing: crab. 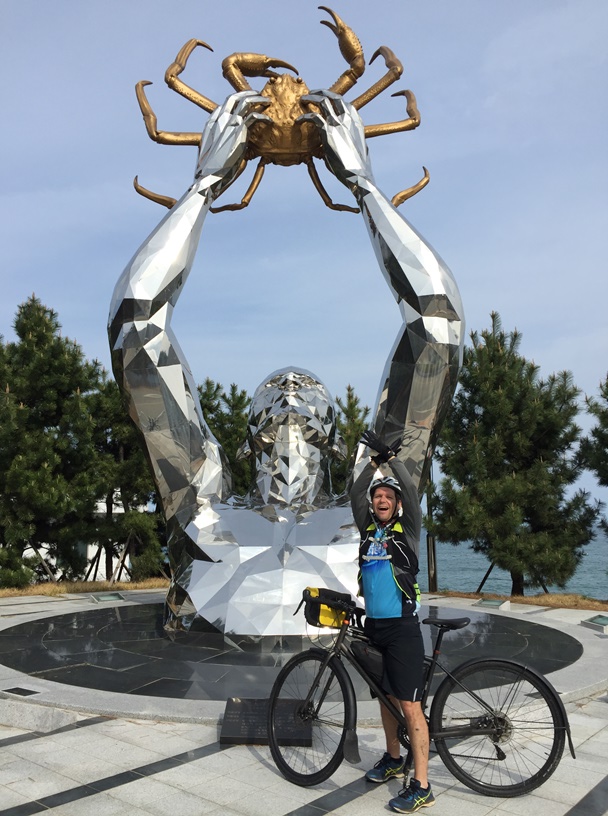 There are a few steep hills, some up to 16% gradient but nothing too difficult.

We take a break at A Twosome Place for lunch but they only sell cake and coffee, so we order some drinks and I eat the leftover bread from this morning. We eventually find Sunrise Park after passing a Crab Themed Park… 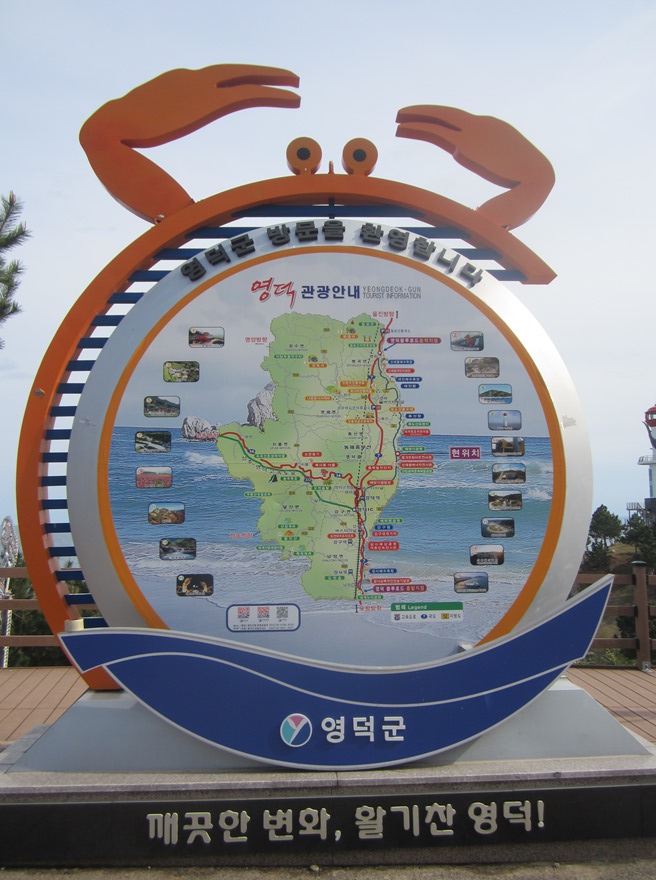 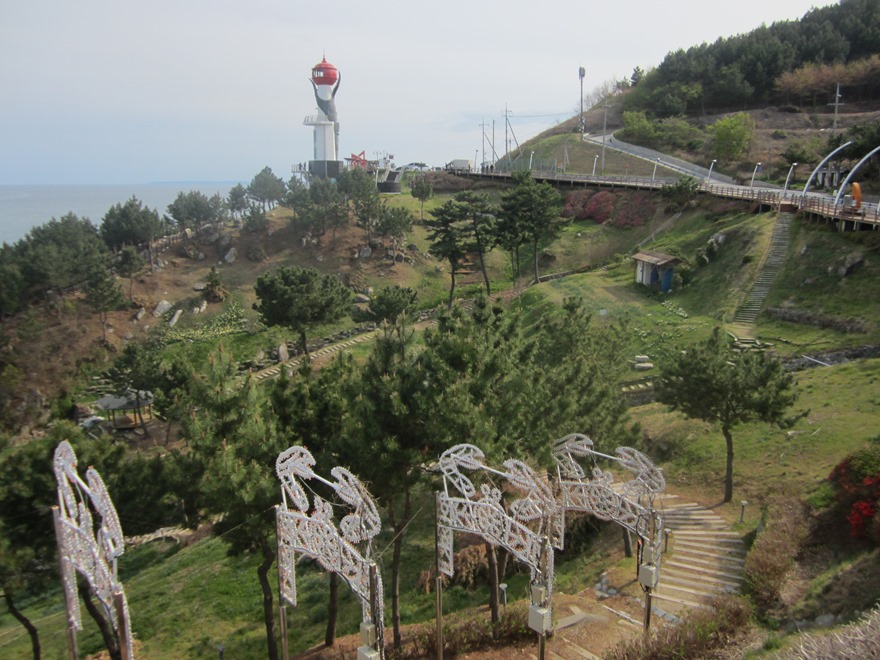 …and get our first stamp in the passport book!

We cycle another kilometre down the road and spot a place to stop at for the night, Paradise Motel.

We go for a walk to a ‘convenience store’ marked on Google maps, which turns out to be a small room at the front of an old lady’s house. It’s feels awkward having the lady stand there watching us as we pick out a few things from the half empty shelves. We decide on some chips and beer and go searching for a place for dinner. I’m so, so hungry from not having a proper lunch!

Unfortunately we have a bit of trouble trying to find a place that serves food so we ask a man in a small shop front and he walks us down the road to an empty looking house. He tries to tell us something in Korean but we don’t understand. Cheye thinks he says they do Japanese food (they don’t). We go in and try to get someone’s attention but the place is empty and all the lights off. It’s only 5:30pm so we decide to come back later as we’ve noticed the locals don’t tend to have dinner that early. 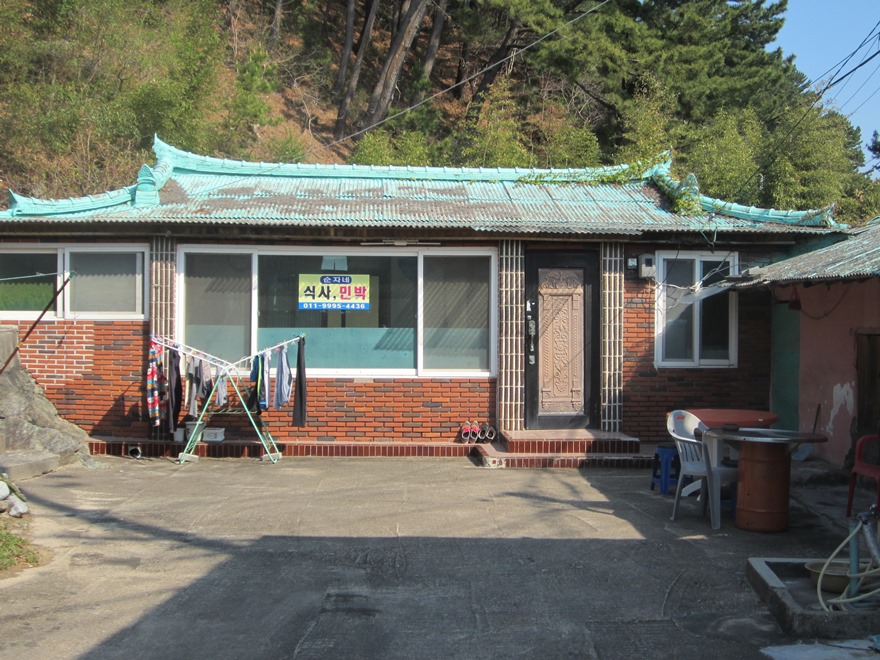 Back at the motel we watch some Korean TV while snacking on beer and onion rings, which very closely resemble Burger Rings. Korean TV consists of hundreds of channels of baseball, golf, singing shows, food shows and infomercials.

We pop back out around 7pm and head back to the place the man showed us earlier. By now it’s starting to get dark but the place is dead quiet and there still doesn’t seem to be any lights on. It reminds me of when we were in Hokkaido last year, in a small coastal town called Shakotan.

We decide to ask the lady at the motel (via Google translate) where there might be a restaurant, and she immediately jumps on the phone and speaks to someone in Korean. She then pops out from behind the counter and walks us to the same place from earlier, only this time the lights have been turned on and a woman greets us inside. The woman gives the motel owner a bunch of cooking herbs before she heads off.

The woman at the restaurant starts talking to us in Korean while pulling out pots and pans, so I quickly whip out Google translate to tell her we are vegetarian. I might also point out that the place is hardly a restaurant… more a room with a table at the front of someone’s house set up right next to the kitchen.

We tell her no meat, but we are happy with rice and vegetables. She disappears into the kitchen and starts making noise as she plates up an assortment of mystery non-meat dishes. We sit there in awkward silence.

She comes back a second time with bowls of rice and melon tofu soup.

She grabs Cheye a beer and instead of letting us eat in peace, she sits down next to our table and watches as we have dinner. At first I think she’s only going to stay for a minute or two to make sure everything is ok, but she ends up sitting and watching us for the entire meal.

I feel so awkward but Cheye thinks it’s hilarious as she talks to us the entire time in Korean about what each dish is and the health benefits by pointing to different parts of the body (“I picked this one from the garden outside, it’s good for your eyes”). By the end of the night we learn she has children (their photos are on the fridge) and they live in Seoul. We also tell her about our current and previous trips to Korea, thanks to Google translate, and show her photos on our phone.

We thank her, pay and head off. Not a bad night of entertainment for 18,000 won! 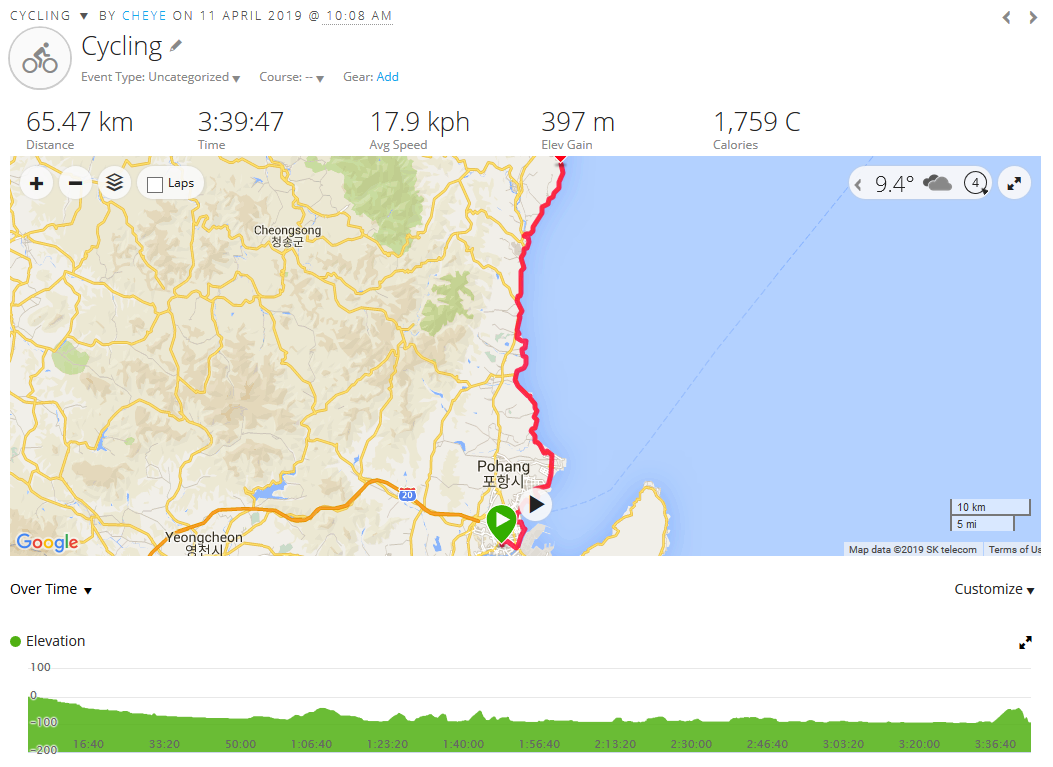 South Korean Travel Tip
Learn a few key phrases and words in the local language. Not just ‘hello’ and ‘thank you’ but also things you may encounter a lot such as ‘motel‘ or food items you might like ‘kimchi bokom bap’ (kimchi fried rice) and maekchu (beer, of course). The locals always appreciate the effort, even if you speak terribly.

One thought on “Day 4 – Pohang to Daetan”